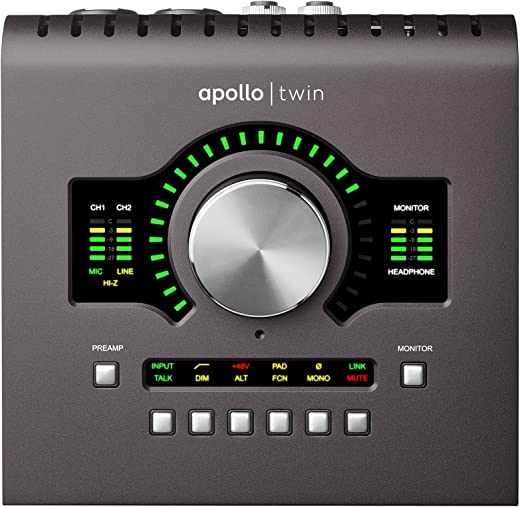 In this review post, we’re going to be discussing the Universal Audio Apollo Twin MKII, including an overview of its unique features.

Apollo Twin MkII is a ground-up redesign of the world’s most popular professional desktop recording interface for Mac and Windows — delivering enhanced audio conversion with the tone, feel, and flow of analog recording.

Built upon UA’s 60-year heritage of audio craftsmanship, Apollo Twin MkII starts with two Unison™-enabled mic preamps and stellar next-generation A/D and D/A conversion derived from UA’s flagship Apollo 8, 8p, and 16. Together with its included bundle of UAD analog emulation plug-ins — which you can track through in real-time with UAD-2 DUO Core processing — and access to LUNA Recording System, Apollo Twin MkII is born to make records.

The secret to Unison is its hardware-software integration between Apollo’s mic preamps and its onboard UAD-2 DUO Core DSP Acceleration. Simply place a Unison preamp plug-in on your mic input, and tap into the classic sounds of the world’s most recorded mic preamps.

The Apollo Twin MkII performs more than just connecting with Unison preamps and complete access to the UAD repertoire. The Universal Audio Apollo Twin MkII audio interface is one of the best you’ll ever use. However, because it is in a tough price bracket, it remains a problematic purchase for some people. It’s certainly worth the money, but it’s also way out of reach for the typical beginner.

If you can afford the investment, it’s the best there is. Everything about it is fantastic, from the Unison preamps to the strong DSP to the plugin bundle.